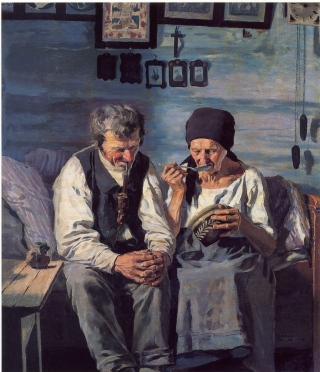 Like many of the Christian NF-types I know around my age, I (finally) picked up Marilynne Robinson’s Gilead. I’d heard a lot of high praise for this epistolary novel of a dying father writing to his young son. And the more I read (and reread) the final pages, the more I realized I was not disappointed by the hype. We could devote an entire series of blog posts to Robinson’s glowing coal of a novel—shining forth, Hopkinesque, with the grandeur of God—and an undergrad course I took actually intended to spend three or four class periods over it. Sadly, that class ran out of time by the end of the year; I suppose I don’t have the time to blog all of my thoughts about it, either.

In those last pages, the ones I relish rereading, John Ames imagines his son as an old man. He cherishes the thought of his son filled with wisdom and experiences and evidence of having loved creation. He blesses the body parts that will trouble him in forty or fifty years—the very same parts that trouble Ames as he imparts his novel-length goodbye. “I wish I could help you carry the weight of many years,” he writes. “But the Lord will have that fatherly satisfaction.” The gap after this sentence in the book, marking the end of the section of text, literally underscores Ames’ impending absence.

Even though this is a passing thought (most of Gilead is, actually), I can’t help but find it a “remarkable thing to consider,” to use Ames’ oft-repeated, almost liturgical, phrase.

I’ve lived most of my life in a way that encouraged dependence. Maybe it stemmed from sibling interactions or loneliness or grade school expectations or pride. Maybe it’s just human depravity. I remember realizing in middle school that while being friends with popular kids was a lost cause, I could easily get other (obviously) lonely people to like me. It became a game in high school. A mode of survival in college. It bled into friendships where I could tell myself I was being loving: listening (a lot), offering advice, giving gifts. And it seemed to start with love.

Soon, the object was not so much loving another person—which involves, of course, another person. The object was myself. Seemingly loving behaviors became vehicles for my feeling affirmed, feeling wanted, feeling needed. None of those feelings are inherently bad, of course. But if, like I did, I preyed on other peoples’ loneliness for the sake of my own gratification, then I really couldn’t call that love anymore.

And the worst thing for those who squandered their dependence on me: I, like every other human, am imperfect (in case the previous paragraphs of my predatory predilection didn’t already make the point). Admitting that sets my teeth on edge almost as much as admitting my mercenary desire to be affirmed. I, even the wizened and bright and compassionate and obviously-humble individual that I am, will let down every single person I happen to come in contact with. I will disappoint. I will say the wrong thing. I will hurt.

I will not be able to provide for their every need. Even on my best day, with the best intentions and all of my resources available, I will be insufficient for even one single human soul.

If only this realization about my own sick self was just one of those cool metaphorical dream sequences in a movie. If only I woke up from it, whistling, and hastily changed my ways. But I think the realest lessons have to come from the realest part of our experience: the part where our hands are lacerated by even the dirt we fall down in, and we can’t look away from the fact that it’s our own damned fault. Over the course of a couple of months, I saw that I had let people down not just by my absences and mistakes—the ways that were immediately apparent—but because I simply and ravenously encouraged dependence on me.

The dying John Ames rightly admits that he can’t bear the burden of years for his son. I think he would have realized that even if he had lived to see his son become an old man himself: he writes only of helping carry, not carrying for him. And so he wisely does not express a desire to somehow absorb his son’s struggles, even if it would make Ames feel the essentiality that I crave. And how can he, when he will be gone?

He writes instead of God having “that fatherly satisfaction.” And in two sentences, he does what has been so difficult for me: he entrusts someone he cannot help to the care of someone who can. Someone transcendent and sufficient. Someone who provides the only rest for hearts that fundamentally seek an object upon which to heap their dependence. Someone who gives meaning to the term “fatherly” and, in fact, “satisfaction.” Someone perfect.

Along with Ames, I must also confess that I can’t bear the weight of many years. I can’t do it for myself, much less another human. I can’t fill those deepest wounds because I’m not meant to be Jesus. (And, sweet freedom, I truly thank God for that.) But because I am meant to be like him, I am not excused from caring for others. The way I imitate him is not by pointing dependent hearts in the direction of myself (the listening, sage, meek, and deeply predatory self). It is by turning my attention, and others’, toward the only Person who deserves the fatherly satisfaction of holding all of the aches in our aging bones and aging souls.

A remarkable thing to consider, indeed.

From Stokervania to Austenland - to Infinity and Beyond!