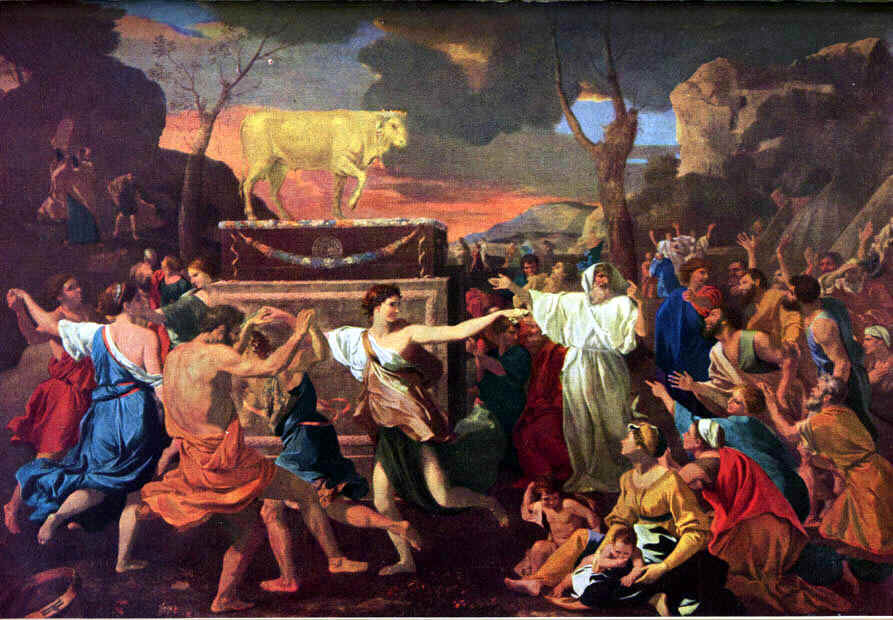 The Adoration of the Golden Calf by Nicolas Poussin.

“Then Jeroboam built Shechem in the hill country of Ephraim and lived there. And he went out from there and built Penuel. And Jeroboam said in his heart, “Now the kingdom will turn back to the house of David. If this people go up to offer sacrifices in the temple of the LORD at Jerusalem, then the heart of this people will turn again to their lord, to Rehoboam king of Judah, and they will kill me and return to Rehoboam king of Judah.” So the king took counsel and made two calves of gold. And he said to the people, “You have gone up to Jerusalem long enough. Behold your gods, O Israel, who brought you up out of the land of Egypt.”

And he set one in Bethel, and the other he put in Dan. Then this thing became a sin, for the people went as far as Dan to be before one. He also made temples on high places and appointed priests from among all the people, who were not of the Levites. And Jeroboam appointed a feast on the fifteenth day of the eighth month like the feast that was in Judah, and he offered sacrifices on the altar. So he did in Bethel, sacrificing to the calves that he made. And he placed in Bethel the priests of the high places that he had made.

The quickest way to domesticate a god is to ‘cast a graven image of their likeness.’

The rationale is simple, actually. When you take after a god, you come to value what that god values. So when Monarchic Israel/Judah took after Ba’al and Jeroboam’s graven calf-idols of Yahweh, their passion for the hungry and destitute fell by the wayside. Because Jeroboam’s version of Yahweh values what Jeroboam values, the Canaanite deity Ba’al and Jeroboam’s Yahweh don’t look so different. As a rule, we conjure up gods whose hearts beat in time with ours.

There is something to the popular suggestion that the gods of human history are just projections of the human psyche. To a point, Bultmann was on the mark in saying that theology is really anthropology. Unbeknownst to him, he’d made a biblically sound suggestion. The Old Testament paints a picture that suggests only two options truly exist: the ‘anthropological’ god of Jeroboam on the one hand – the golden calf whose sheer existence sacrilizes whatever nonsense the king dreams up – and the true God, the Facilitator of the Exodus on the other. We can have a projected god – Jeroboam’s God – who is for us because we are for us and he belongs to us, or we can have a God who is for God, and who, because He is for Himself, is ‘for us’ in a better way than the pliable, relentlessly affirming images we’d graven.

The ‘anthropological’ god of Jeroboam, however appealing, always proves himself a cheap trade-in, because although he is ‘for us’  as we are for us, his vote in our favor is a vote of betrayal, because our self-love is traitorous – not only to the true God who facilitated the Exodus, but also to us. Who lies to us more than we do? Who sabotages our endeavors more than we do? We are constantly acting against our best interests, choosing shallow affirmation over love, low-cost gratification over lasting hope. We are the antagonists in our own stories. Jeroboam’s god, who is for us as we are for us, is fickle because we are fickle. He is only as much of an ally to us as we are enemies to ourselves. He is only as trustworthy as we aren’t. Having a god that is for us is a living nightmare, because it has always proven to entail that he is like us.

In this light, taking on the values of a god who is already for us is a non-action. It is not a conversion, because if the god to whom we conform our values is already on our side we have nothing to surrender. Somewhere beneath our ‘collective consciousness,’ our fealty to the divine suzerain whose image we ourselves cast is an insidious form of circular self-devotion. Our service to Jeroboam’s Yahweh is really just service to our own community’s interests. Fealty to the graven image of the god of Israel proves at last to be something akin to “my country, right or wrong.” Soon enough, Jeroboam’s Yahweh has revealed himself to be a projected self-sanctioning of a return to Pharaohism.

He is impersonal. Unlike the self-serving God who facilitated Israel’s escape from Egypt and Pharaoh’s grip, he has no intrinsic personhood. He only has our personhood, and so he always votes in favor of our status quo. Like the gods of Egypt, he is bound to be the monarch’s lapdog, and therefore our worship of the impersonal Neo-Pharaohite god who advocates with faux-authority for our status quo is really just a sacrilization of our own self-destructive communal desires. Anything other than Yahwism is a form of illegitimate apotheosis [noun: elevation to divine status : deification (Merriam-Webster)]

Conversely, Yahwism [noun: the worship of Yahweh by the ancient Hebrews (Merriam-Webster)] is by nature a catalyst for the radical reorientation of communal values because the God at the heart of it is self-interested and is consequently beholden to nobody’s status quo. He is free to demand change from His subjects because His godhood is not contingent upon their circular self-devotion. Their continued existence is contingent upon His sustenance because He is real. He is the relational ground of being. The Yahweh who brought the Israelites out of Egypt, who forbade them from making a graven image of His likeness, is free to be God, because He is. And Jeroboam’s golden calf is not.